I got lost in the YouTube rabbit hole recently, which is how I stumbled upon the music video for Color Me Badd’s 1994 single “Choose”.

I had not seen this video since it first came out 25 years ago (!) but my God, all the memories came back full force. There was a very specific time and place when this video was absolutely it for me (or “da bomb”, as we used to say HAH). And with no internet or cable back in the olden days, my only hope to see it was the local TV channels that showed the latest videos. They only had access to a few videos at a time, so luckily that meant they played the ones they had on repeat.

My classmates and I were crazy about Color Me Badd (or CMB, dontcha know) and we would sing their songs between classes, singing all the parts together (including the backup vocals and instruments) with no regard for harmonizing or proper phrasing. We thought we were pretty awesome!

The video ticks all the boxes for a 90s music video: Black and white? Check. Rain-spattered window views? Check. Moodily staring out of windows? Check. Quick cuts of brooding looks into the camera? Check. And most importantly – the vest over a plain white T-shirt? Check check.

Broodily staring into the middle distance

Angrily staring at me. What did I do? 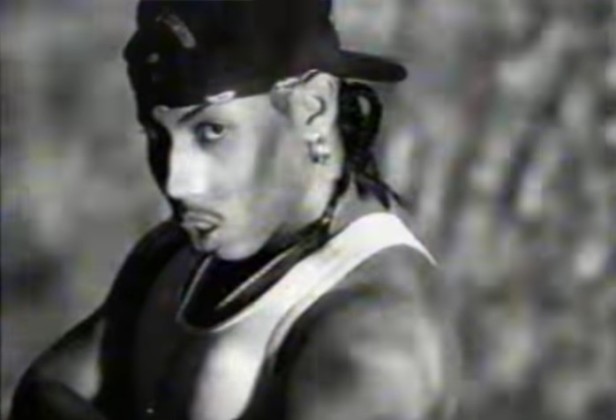 Spoken interlude while standing behind a rain-spattered window.

I don’t know why the vest became such a 90s staple. It seems oddly specific and niche now. Who decided that that was to be part of our uniform? I understand the fashionability of our other uniform – the floral slip dress over a plain white T-shirt, paired with Doc Martens. But the vest? I never understood that. Still, I remember when I finally got one of my own – I wore it every chance I got, and I felt like the shit. Sadly, I never could afford Doc Martens.

If the video meets all the requirements for 90s videos, Abrams meets all the requirements for 90s heartthrob status. The chiseled jawline, that slicked back mini-pompadour with the slight fade, that meticulously groomed goatee, and that subtle eyebrow raise – dayum. I had the hugest crush on Abrams with his brooding and aggressive stare into the middle distance – what is he looking at so intently? His commitment is praiseworthy. He does not break his concentration at all.  His distinct style of shifting to the high notes, that growl towards the end, and his drawling of “Are you with me baby?” made me fangirl so hard before I even knew about that term.

I made the tragic mistake of Googling Abrams to see how he is now, and I have to admit that my 14-year-old heart broke a lot. Let’s just say I will stick to this version, preserved in all its peak 90s glory. (On a serious note, it’s never good to find out that someone has alcohol problems, which matters much more than whether someone still looks hot. I do hope he’s better now.)

It was a happy time when I finally got the album Time and Chance (which contains this single) on cassette tape (Did you get that? I had it on cassette!) It meant that I could play “Choose” over and over again. That entailed rewinding the tape, but if you did it often enough you could memorize how long you needed to press rewind in order to cue the song perfectly.

But for all the visuals, the song itself holds up to this day. It was produced by Jimmy Jam and Terry Lewis, who were the big names in 90s R&B, and it comes through in the recording. The song has a great melody and pretty sophisticated lyrics – spoken interlude and whispered asides notwithstanding. It is, as the youths would say, a total bop.

One thought on ““Choose” – Color Me Badd”