Every girl goes through a boy band phase, and anyone who denies it is lying.

My nieces are crazy about One Direction, and the poor things think that they’re actually a boy band. Dear Sam and Chloe, I hate to break it to you, but that’s not a boy band. They don’t even dance! What are they teaching you in school? So I took it upon myself, a veteran of my own boy band days, to educate these children. And so we spent a very educational couple of hours on Youtube, in what I call Boy Bands 101.

(Bonus points for anyone who can name the videos featured!)

A true boy band usually has five members. In some rare cases, there are only four members, but five is the magic number in order to attain the optimal personality mix:

The handsome one – usually the lead singer, but not necessarily. This is the classically good-looking guy who is sure to melt the majority of hearts. 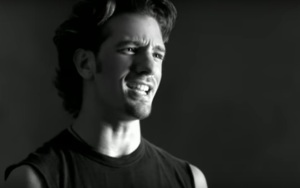 The baby – the youngest of the group who sometimes starts out even before becoming a teenager, and whose cuteness, unfortunately, has a limited shelf life (Nick Carter). The exception being Joey McIntyre because dayum.

The bad boy – the rebel. The one with the tattoos, goatee, backwards cap, or ripped jeans. But deep down he’s got a good heart and he’ll love you forever because you understand him. 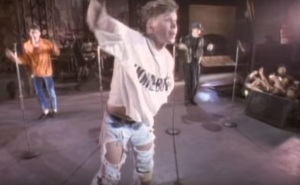 The quiet one – the one who doesn’t talk much in interviews, who usually fades away after the boy band breaks up and members go their separate ways. That doesn’t mean we love him less.

The token minority – usually with the exotic looks or background, because diversity is key. 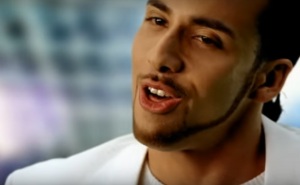 This is what separates the boys from the, umm, boys. The true boy band embraces the dance! The cheesier the choreography, the better. There are a few staples that must never be left out of the repertoire.

Dance on the beach? Check. 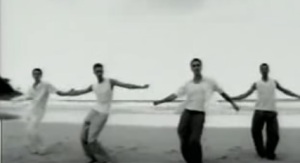 Stand dramatically in the rain? Check. 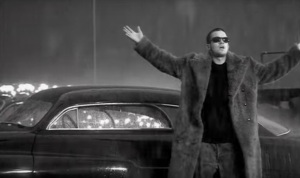 Hand on heart because he loves you, never forget that!

Point to the eyes because he looks only at you, girl.

And let’s not forget the boy band equivalent of vogueing – the all-purpose point. Best done in silhouette to better showcase the moves.

Where did the suspect go? I don’t know, let me flex first. He went that way, officer. No, he went that way! He lunged like this too. No, I think he’s up there on that tower!

Boy bands dress appropriately. Are you going to be in a tropical jungle with magic bubbles? Everybody knows that calls for a turtleneck with batik lounge pants.

Are you leaving on your private plane in what seems to be cold weather (judging from your friends’ overcoat)? Then it’s okay to wear a tank top as long as you wear a jauntily cocked hat, because we all know that 70% of the body’s heat escapes through the head. Not only is their fashion sense impeccable, but they also know their basic science. 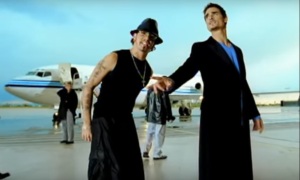 The ultimate boy band promise is to cherish us. To be our strength and hope. They don’t care who we are, where we’re from, what we did, as long as we love them. That whatever they said, whatever they did, they didn’t mean it. They just want us back for good. And they will swear it again. That if we’re single, single, they’ll be our boyfriend. And that we’ll always be their Cover Girl.

Though there is one thing no one has quite been able to figure out. What way exactly do they want it?

And honestly, after watching all these videos, who can resist recreating them? My oldest niece barged in on us while Sam and Chloe and I were recreating NKOTB’s “Summertime” in my room. Do you think she laughed at how lame we were? Nope. Without a word she got into place and posed with feeling. And that is the ultimate testament to the power of the true boy band over a girl’s heart.

← The Shawshank Redemption (1994) – “Hope is a good thing, maybe the best of things, and no good thing ever dies.”
My Top 10 Favorite Voices in Music →