Can we just stop for a moment and try to wrap our heads around the fact that David Niven and Cary Grant are together in this movie? Not to ignore Loretta Young, but it’s Cary Grant! And David Niven!

The movie opens with children singing “Hark the Herald Angels Sing’ on a snowy street, Santa ringing his bell around the corner, then Cary Grant swooshes in and is his usual charming and suave self. He helps a blind man cross the street and saves a lady’s baby from being hit by a bus. All done with his blindingly beautiful smile.

Niven plays Bishop Brougham, who’s so intent on building his cathedral that he starts to neglect his wife (Young) and daughter, as well as his congregation. He prays for help, and Cary Grant is the answer to his prayer. Which, hello! Isn’t he the answer to many prayers? Hah.

The trouble is, Brougham thinks that Grant (who likes to be called by the very un-angelic name Dudley) is there to help him build his cathedral, but actually Cary’s mission is to remind the bishop of the important things – namely his relationships with his congregation, his daughter, and especially his wife. For most of the film Loretta Young is so sad and just pining for attention from her husband, and her wide eyes help her every bit.

Look out for that angel who looks like Cary Grant!

Dudley and Mrs. Brougham start spending a lot of time together because the bishop is always so busy asking for donations from rich people. In between Dudley also charms everyone around him, because he’s Cary Grant and he’s an angel! He inspires an old professor friend of the Broughams, who’s been working on his book for 20 years. He influences the very rich Mrs. Hamilton, who demands so many things from the bishop before she coughs over her donation for the church. But Dudley starts to get attracted to Mrs. Brougham, and of course her husband notices. Things finally come to a head when Bishop Brougham realizes that he has to fight for his wife. He confronts Dudley, and when Dudley realizes that the bishop has finally learned his lesson, he gives him a big smile and prepares to leave. Dudley erases everyone’s memories of him. On Christmas Eve, the bishop gives a sermon which he thinks he wrote, but which was actually written by Dudley. Dudley stands outside the church watching the people, and those he helped just look around and feel a presence but can’t quite understand what it is.

This was remade in the 90s as The Preacher’s Wife with Denzel Washington as the angel, Courtney Vance as the preacher, and Whitney Houston as his wife. That movie was pretty good in its own right and can stand on its own, especially because Whitney’s musical numbers are heavenly. But it shouldn’t be compared with this because of course, The Bishop’s Wife is a classic.

There are scenes of children having a snowball fight by the lake (where you will see the actor who played the young George Bailey in It’s A Wonderful Life; incidentally, the bishop’s daughter is played by the actress who played George Bailey’s daughter Zuzu!) and a scene where Dudley and Mrs. Brougham skate on the lake while a band plays music. In short, all the perfect, postcard-y Christmas scenes. It’s pretty strange that these images will invariably evoke Christmas for someone like me, who lives in a tropical country where the only seasons are hot and hotter. But there you have it, I totally get the winter wonderland thing.

Nothing more Christmas-y than skating on the pond!

Cary Grant is just so believable as an angel. With his trademark accent, the way he talks and his smile, he fits the part perfectly. And to think that David Niven was originally cast as the angel! But there were some casting and directorial changes, and eventually Cary Grant was given the angel role and David Niven ended up playing the bishop.

One of the great scenes in the movie is when Dudley is talking to young Debby Brougham. He tells her how whenever we feel a “good” presence around us, whenever a stranger looks familiar but we can’t quite place him, when someone helps us out when we need it most, or when we get that spark of inspiration, that’s an angel. Isn’t that a heartwarming thought? It ties together all the things that Dudley did for the people around him, and how their lives were all changed without them remembering exactly how. The movie ends with Cary Grant walking away from the church with a smile on his face, and we are all left to sigh. 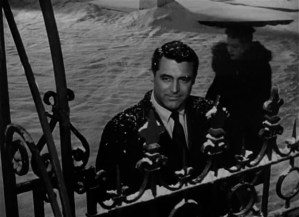