We spent a quiet Holy Week at home, so we decided to have a movie marathon – one religious movie every day from Holy Monday to Good Friday. The whole country practically grinds to a halt during this holiday, which means there are no news shows or basketball games. So our dad, who usually only watches these two types of shows, joined our marathon too. These are the movies we watched this week:

I had never seen Spartacus before, and I was excited to see why it’s considered a classic. It’s the story of a slave (Douglas) who leads a rebellion against the Roman Empire. I knew only of the famous “I am Spartacus!” scene, and I was waiting the whole film for that iconic moment. When it finally came, I teared up a bit. It’s an epic in every sense (with a run time of more than three hours), and the battle scene between the slaves and the Roman army is particularly memorable, with the slaves unleashing fiery logs on the Romans. Apart from the impressive effects and scale, this scene is memorable because this is where we finally see the cost of Spartacus’ revolt. I have to admit that the movie feels a bit bloated at times, and some scenes, especially those involving Varinia (Simmons), drag a bit. But when the focus is on Spartacus and Antoninus’ friendship, the emotional stakes become higher. I’d only seen Olivier in Pride and Prejudice before this, so to see him in full-on villainous mode is also extra special. All in all, I can understand why Spartacus is a masterpiece, but it may take a while for me to rewatch it.

This is another movie I had never watched before, and it was requested by my sister because this was one of the movies she remembered watching on television when she was a kid. Richard Burton is the tribune Marcellus Gallio who is assigned to crucify Jesus Christ. He’s an unbeliever, but his slave Demetrius (Mature) is a faithful follower. Demetrius is disgusted at the centurions’ heartlessness at the Crucifixion, as they even place bets on who gets to keep Christ’s robe. Gallio wins the bet, but Demetrius angrily takes it from him. In the ensuing confrontation, Gallio touches the robe and begins to be tormented by his guilt. He returns to Italy and reports to the Roman emperor, but he has psychotic breaks as he is tormented by his involvement in the Crucifixion. So he travels back to Judea in search of the robe, which the court physicians say is the only way he will be cured of his madness. He meets the early Christians and reunites with Demetrius, and an encounter with Peter finally makes him a believer. He goes back to Rome, and not even a threat from the emperor Caligula can make him renounce his faith.

Compared to Spartacus, The Robe unfolds at practically breakneck speed. The movie is compelling, not least because of Burton’s acting. As with biblical epics of the 1950s, he overacts at times, but it’s easy to look past that because he is able to show the emotional journey undertaken by his character. Most of all, the story itself is touching without being preachy, which makes it a great addition to yearly Holy Week viewing.

“A curse on your empire!”

For me, this is the ultimate biblical epic. Charlton Heston stars as Judah Ben-Hur and Stephen Boyd plays his childhood friend Messala. Ben-Hur is a Jewish prince while Messala is a Roman tribune, and their friendship is ruined as adults when Ben-Hur refuses to turn traitor to his countrymen for Rome. Messala condemns him to the galleys as a slave and imprisons his mother and sister. Ben-Hur endures years of slavery before a chance encounter with a Roman aristocrat allows him his freedom, and when he returns to Judea looking for his family, he finds out that they are living in a leper colony, and that his sister is dying.

The best part about this movie is Ben-Hur’s encounters with Jesus. When he is first transported across Galilee along with the other slaves, he collapses because of thirst but the Roman soldiers refuse to give him water. Jesus sees him and gives him water to drink. This meeting profoundly affects Ben-Hur though he does not know why.

Judah Ben-Hur meeting Jesus (whose face we never see) for the first time.

Later, he meets Balthasar, one of the Three Kings present at Jesus’ birth, who tells him that the baby he once visited is actually the Messiah. Ben-Hur has a chance to be present at the Sermon on the Mount, but he is preoccupied with saving his sister and mother so he leaves. But Esther, the daughter of his faithful servant, is a follower of Christ, and convinces him that Jesus can heal his family. Ben-Hur tries to bring his sister and mother to Jesus, but it’s too late. He’s been sentenced by Pilate and when Ben-Hur sees him, he is carrying his cross to Calvary. Ben-Hur recognizes that this is the man who gave him water when he was almost dying, so he returns the favor and tries to help Jesus. Throughout these scenes, we never see Jesus’ face, but it’s enough to see Heston’s reactions and the way his eyes light up at these encounters. (No wonder he won an Oscar.) The first time I saw this movie, I cried like a baby at this scene, and until now I still tear up every time. In fact I’m getting goosebumps just writing this. In the end, Ben-Hur thinks that because of Jesus’ death his mother and sister are doomed, but it turns out that the miracles are only beginning. *sniff*

…and in the end he tries to return the favor.

Just like I thought Ted Neeley really was Jesus, I also thought Charlton Heston was Moses. I saw this film before I ever saw Ben-Hur, so even though that movie touched me deeply, for a long time I only saw Heston as the prophet. It’s a pretty straightforward telling of the Bible stories we learned growing up (though every rewatching reminds me that I should have paid more attention in school). Moses’ mother Yochabel places him in a basket to float along the Nile in order to save him from the massacre of children decreed by the Pharaoh. Baby Moses is found by Bithiah, Pharaoh’s sister, and he is raised as a Prince of Egypt alongside the next Pharaoh, Rameses II. But Moses finds out that he is in fact the son of Hebrew slaves, and that it is his destiny to free his people from bondage.

It’s Yul Brynner’s Rameses II that elevates this epic, because he shows us a multi-dimensional character instead of a cardboard cutout villain – proud and unyielding, dealing with his own demons and who ultimately is bound to lose everything spectacularly.

I’ve watched this countless times, but one scene stood out for me this time because of its poignancy. After finding out he is a Hebrew, Moses shuns his privilege and starts working with the other slaves. The Egyptian guards kill an old man for speaking out, and as the man lies dying in Moses’ arms, he looks at Moses and says his only regret is that he can’t live long enough to look at their liberator with his own eyes. 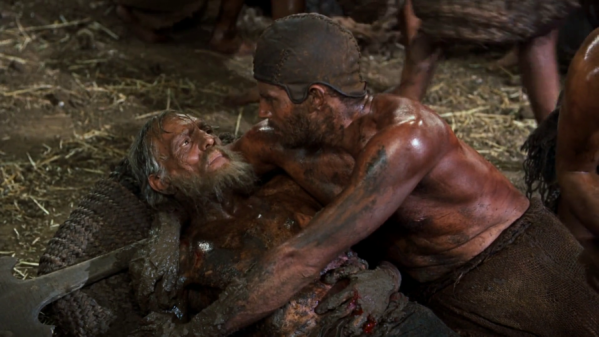 “My days are ended and my prayer unanswered.”
“What prayer, old man?”
“That before death closed my eyes, I might behold the deliverer…”

Some effects are pretty laughable, like the pillar of fire, but the parting of the Red Sea is still amazing.  And every year, inevitably, we end the film by having a debate on why Moses was never allowed to enter the Promised Land. 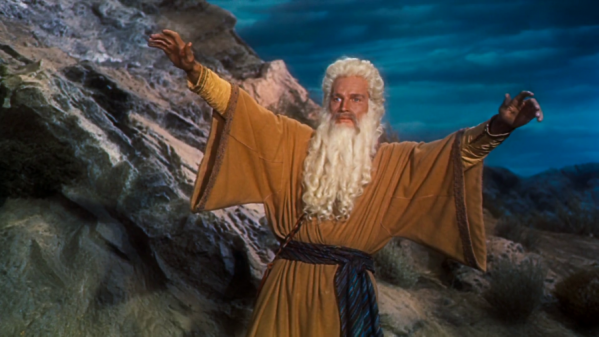 Of course, there’s only one movie we watch on Good Friday. The one movie on this list that wasn’t made as a biblical epic, the rock opera that is not even religious. But it is the ultimate movie for our weird family, and here’s why.