U2 Joshua Tree 2017 Adventures: How To Survive the GA

The GA (General Admission or floor section) at U2 shows has always intimidated me. It seemed like a world unto itself, with its own lines, rules and leaders, kind of like a street gang. I never in my wildest dreams thought I’d ever experience the GA, and I was content for it to be a sort of myth.

But when I went to a U2 show for the first time a few years ago, I was surprised at how relaxed the GA was. People were just milling about, and not crushing or pushing each other as I expected. And there was plenty of space towards the back where you could just hang around, and still get a fairly decent view of the band. I made a mental note that if I ever had the chance to go to another concert, I’d try the GA. The people around me in the seats were pretty subdued, so more than anything I was going for the experience – only die hard fans would want to stand for hours at a show, but that also meant that these people would be singing their hearts out and enjoying every moment. And I wanted to be part of it!

I decided to try for the GA at the Rose Bowl in Los Angeles. I figured since it would be my second show of the tour, there would be no pressure to get the best view of the stage, because I’d already seen them in Santa Clara. So the purpose of the Rose Bowl show was just to be in the moment. Here are the five key points I learned from this epic adventure.

U2 fans and GA veterans are helpful and very willing to share their experiences with newbies. It also helps to know what to expect so you can prepare yourself. My number one resource for all things GA was Joe Ahorro’s article on the subject. Another useful resource was Twitter: U2 Gigs and U2Start, in particular, have networks that can keep you updated, from people on the scene. The most important thing is knowing beforehand where the GA line is so you don’t waste time looking for the right gate or entrance. Thanks to Twitter, I knew exactly where to go at the Rose Bowl.

You gotta know where to go!

2. GA tickets can be simpler to get.

One of the good things about the GA is that it’s simpler to get tickets, because everybody is literally on the same level. You don’t have to worry about what section or seat has the best angle, because on the floor, everyone is equal. No choices or decisions needed – buying a ticket is pretty straightforward.

3. It’s important to know your goal.

I had absolutely zero intention of getting to that most coveted part – THE RAIL a.k.a. the front row, where you can hold Bono’s hand, hand the band gifts (if security allows), and have an unobstructed view. This is the part reserved for those fans who are willing to camp out overnight.

All I wanted was to be on the floor, towards the back, because I was scared of being crushed by people near the stage. So I was pretty relaxed about getting to the venue. For the 8 pm show, I got to the Rose Bowl at 1:30 pm after a fairly heavy lunch that I hoped would be enough until I got inside the stadium.

4. Be prepared for the line…

Stadium rules about bags are very strict, as I found out. When they say that purses must be the size of an index card, they mean it.  So I made sure to find the smallest purse I could (which was only big enough for my credit cards and cash). I also brought a couple of bottles of water, a banana and some snacks. Hydration is key! Especially since the line at the Rose Bowl was at the golf course, with no shade whatsoever. It was a balancing act of drinking just enough water to keep myself from fainting, yet not so much that I had to go to the bathroom. There were portapotties and I was NOT ever going to step in one of those.

I did not bring anything that I wasn’t prepared to throw away at the gate. Outside food wasn’t allowed (though bottled water was). I packed my snacks in a Ziploc bag, and honestly I was so excited that I could not eat anything I brought. Good thing a lovely lady beside me in line gave me some candy, because I ended up throwing my snacks away at the gate.

The seasoned fans came prepared with deck chairs, umbrellas, and even tents.

The more experienced ones came with deck chairs and even tents, so they were quite comfortable in the heat. I, on the other hand, did not even have an umbrella. All I had was a scarf that I used as a turban when needed. I had no idea L.A. could be so hot! It turns out the weekend of the concert was the hottest for May, and after the show L.A. temperatures went back to usual. And I was wearing a black shirt and jeans. I wish I’d worn more weather-appropriate clothes, but at least wearing jeans I had no worries about sitting on actual dirt. Though there were moments when I really thought I would faint from heat exhaustion and hunger. I remember thinking what a waste it would be if that happened, and honestly it must’ve been because my guardian angel was watching over me that I made it with no incident.

See that lens flare? That’s not a filter. That’s how hot it was. 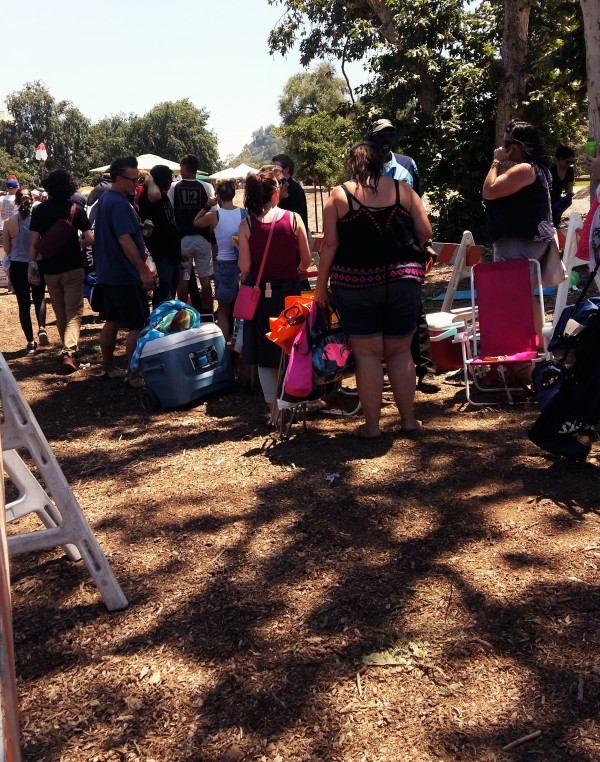 I actually sat on that dirt!

When I finally got inside, I only had three items on my list: go to the bathroom, buy my food, and find my place. I expected long lines in the ladies’ room and concession stand, so I knew that I was giving up a prime spot on the floor. But I was okay with that, because I didn’t have big goals of getting near the stage anyway, and my comfort and health were more important at this point! But when I got in after completing my to-do list, I was shocked at how close to the stage I still was. In fact, it turns out you don’t have to engage in a footrace to the rail if you don’t want to. I was able to find a spot around five rows away from the B stage, so I sat down on the hot metal floor and waited for that pesky California sun to finally set.

I can’t believe I was this close to Bono!

I started out five rows away from the B stage (which was my goal). But it was a bit of a struggle because the person in front of me was so tall. It hit me that sometimes it really sucks to be a short person. Luckily, the wonderful Michelle – who I had not spoken to until that moment – voluntarily gave me the spot in front of her, which was even closer to the stage! Did you get that? I didn’t even know her, but she was nice enough to give me the spot in front of her,  of her own free will, just so I could see Bono without having to be on tiptoe the whole time. It still blows my mind how someone can be that nice to a complete stranger.

I actually saw his face!

In fact, all the people I met were great. Alex was one of the GA veterans beside me in the line, and he gave useful advice to me and my fellow first-timers Siobhan and Annette. Inside the stadium, a couple of guys almost got into a fight because someone was trying to cut to the front. They were right beside me and I know my face betrayed how scared I was, because these two kind gentlemen pulled me a little towards them and looked out for me until the brawl was over. Virginia unofficially “adopted” me when she found out I came alone, introduced me to the other people beside us, and even offered me some special “plant”, if you know what I mean.

Even the stadium staff were amazing. Going into the tunnel, they ask you to raise your hand so they can easily see that all-important wrist band. At one point I was wondering why the people in front were raising their hand as if in some weird defiant salute. The staff were lined up like a welcoming committee to check the wrist bands, and since our hands were raised, they actually high-fived each one of us as we entered! That was a fun moment. I went to the show on my own, but not once did I feel alone throughout the experience.

All of this taught me that the GA is not that unreachable, after all. Even simple fans like us can be there! We don’t have to camp out overnight or even bring tents to make it. I’ll just do better next time. I’ll remember that I can be as relaxed about getting to the venue as I want and that I don’t have to be there super early. I have to bring an umbrella and something to sit on, and I must dress appropriately.

It was the first time I ever saw Bono up close and not on a giant screen or like a tiny speck from the nosebleeds. I actually saw his face! He was a real person standing in front of me! There were times when I was just staring at him, The Edge, Larry, and Adam – trying not to blink and wanting to take in every single moment. I half expected fireworks or a halo of light to envelop them as they were standing there. Instead, they were so badass and nonchalant while all of us were losing our minds, perhaps me most of all. Bono, don’t you know how momentous just seeing you up close is? That night was amazing beyond words. And when they sang “Bad”, I let everything go as Bono asked, and cried like a baby. Actual, real tears flowing, not caring if anyone saw me. I couldn’t believe I was lucky enough to be there. After everything I went through and all the hiccups, I had made it. I can now say that I was at the GA at a U2 concert!

One thought on “U2 Joshua Tree 2017 Adventures: How To Survive the GA”