10 Female Celebrities I Hate The Most

Hate, dislike, loathe, and despise are very strong words. But they aptly describe my feelings for all the women on this list. I know what you’re thinking, “All she does with her time is hate on celebs, how pathetic!” which is a little true. (Sandy: Why is that a bad thing?) I’m just having one of those days where I’m pissed off by everybody. Yeah, depression can do that to a girl.

All of the people on this list are the ones I would gladly chuck into a black hole. I will listen to their screams of agony as they fall into the vast empty abyss. Dark, I know. Yes, yes, I’m a petty and horrible person. But I’m just saying out loud (text-ually?) some of our evil thoughts. (Sandy: Don’t bring me down with you!) You may not agree with some of my entries, but you have to admit, hating and expressing it can be very therapeutic. This definitely has been. Enjoy and hate on, my fellow haters!

Who doesn’t hate Gwyneth Paltrow? I may just be hopping on the bandwagon because I grew up in the “I hate Gwyneth” era, but she just looks so full of herself all the gosh darn time. “Ooh, I speak French.”, “Ooh, I can afford expensive milk shake ingredients that no average person can, but I’ll berate you for not including it in your daily diet.” and “Ooh, I use steam to further inflate my ego through my vagina”. She needs to fall off her high horse which she probably bought from Japan from some guy who claims it can heal her soul and improve her digestion.

I know very little of this person and yet she rubs me the wrong way. Like the feeling of sand in your bikini bottoms, that’s how she makes me feel. Her unfunny jokes and just the overall way she speaks. And no, I don’t hate outspoken women. I hate women who are outspoken just because it makes them look all cool and better than you. I would gladly see her get poked by a toothpick in the arm 50 times.

A model whose only facial expression is that smug face thing. And yes, maybe my ginormous crush on Zayn affects this. But to be fair, I hated her long before that. I also want to tell her that. (Sandy: Such a hipster. ‘I hated her before you did’.) “No, you’re not a super-model. Your parents are just really rich and well-connected.” I also like Bella better. Eat your heart out Gigi Hadid. I hate the fact that she’s suddenly everywhere even though she has one face. (Sandy: But, but…don’t we all?) Derek Zoolander showed us more variety. How I hope she buys a really hot cup of coffee from McDonalds and spills it on her lap.

She is someone who thinks feminism is all about talking about your lady-parts. Yes, I believe that we definitely have the right to speak about them. But that doesn’t mean that that should be the only thing we fight for when it comes to feminism. And all her jokes are either stolen or about her vagina. I mean, I’ve never heard of anybody talk about their hoohah as much as she does. Girl, get some new jokes! How I would love to throw an egg at her face every time she gets caught stealing a joke or talking about her vag.

Where do I start with this one? Ah!

The Seven Things I Hate About Miley Cyrus:
1. She can’t sing. And that’s coming from someone who really can’t sing!
2. She can barely act. I’ve seen two of her movies and rolled my eyes until they almost rolled out of my head.
3. Her fashion sense. I’m all for individuality but c’mon! She oozes trailer trash.
4. She’s not a good person to look up to, obviously.
5. She also does the whole culture appropriation thing. But she also dumps it and talks trash about it after.
6. THE TWERKING. Girl, get over yourself. You ain’t got anything to twerk with.
7. THE TONGUE WAGGING!

Someday,  she’ll eat a really sour orange slice,  and that will be the day she keeps her tongue insider her mouth.

She ruined DOCTOR WHO! (Sandy: THAT IS COMPLETELY UNFORGIVABLE.) That’s enough a reason to hate someone. She thought the show was all about her. And sure, the writing didn’t help. But her acting emitted that. And she dated my other crush Richard Madden a.k.a. Robb Stark a.k.a. King in the North, King of the Trident, and Lord of Winterfell. All other companions on DW have had their good points and their bad points, but she was the only one that ever made me want to stop watching the show. I know, I’m a bad fan. But she just got me way too riled up. I need a Dalek and a Cyberman to chase her around just to appease my anger.

A lot of people will be like “WHAT?!?!?!” but yeah, I hate the girl. In all honesty, I despise people who look smug all the goddamn time. It’s not confidence, it’s this smug expression that people like her use, you know the one, it’s half closed eyes and slightly pursed lip thing.

It didn’t even take me that long to find a picture!

And no, no, no! She is not MJ! Please don’t really let her be MJ *sobs*.  She was pretty much the only thing I hated about Spider-Man: Homecoming. Could I get someone to lace her lotion with cooking oil so she gets a really bad sunburn?

This is! The part where! I say I hate her fucking guts! She needs to go away. Like, seriously. Another person who has a serious face problem. Hasn’t anyone ever told her that looking like you smelled dog doody is not a good look? And that whole doughnut licking thing, what the hell was that? How rich and pompous do I have to become to get to the “I hate America” phase in my career? I don’t know, maybe she just got tired of screaming at the top of her lungs and not enunciating her words (the lyrics are “I only wanna die alive” but she makes it sound like “AayyAAAYYYaaayyyyaaaly”) that she decided to be a total douche bag and lick un-bought doughnuts. I took that stunt as such an insult ’cause I really love dougnuts. How dare she ruin the best sweet treat in the world? I hope she gets really bad neck pain from only showing off one side of her face.

She thinks she’s so artistic and original. But puh-lease, all she does is steal other people’s culture and claim it as her own vision. And her pathetic excuse about how she’s still learning about what is right and wrong when it comes to stuff like that, my mother never had to teach me not to take other people’s culture and twist them to fit my own “style”. And don’t get me started on “Firework”, really, a plastic bag? I’ve never in my life compared my feeling with a plastic bag, has anybody ever? That line made it obvious that all she wanted to be was “inspirational”, fuck off. PLUS! The constant dissing of Britney Spears! (Sandy: Not our Brit Brit!) Bitch, you wish you were that iconic. I hope someone shaves off her eyebrows in her sleep.

(Sandy: This is gonna be fun.)
Ooh, where do I begin with this one? I’m going to have fun! I’m not even going to target her dating life because a girl can do what she wants. Instead, I’ll target the men by just saying one thing, how are all of you so stupid??? Done. She hates it when other women joke about her and yet she slut shames women in her songs! “Boohoo, he likes her better”, “Boohoo, he likes someone else”, and “Boohoo, he’s a horrible person for leaving me”. Well, maybe it’s ’cause you’re a psycho bitch. And that’s coming from a psycho bitch, though in my defense, I’m psycho in a friendly, horrible sense of humor way. Why aren’t people over her yet? Her songs have a formula, she can’t really sing, and she’s creepy as fuck. “Look at me, I’m gonna buy a house near a guy after dating him for a week.” That’s so not normal dude. And she’s so petty. A guy broke up with her. So there must be something wrong with him? She’ll tell the world about it in her songs but how dare he do the same! And hasn’t anyone noticed yet, she does the whole cultural appropriation thing too! And yes, she’s all for feminism. But only her version of it. Tina Fey called her out, and suddenly the amazing comedian isn’t a feminist. But sure, she’ll thank her fans after they abuse Michael J. Fox on Twitter about his illness. (Sandy: The lowest of lows.) And she so ain’t #SquadGoals, I don’t know about you, but my Squad doesn’t include only tall and skinny white women. Given, my squad consists of two people, but at least they’re totally different from each other. No, I will not shake off my distaste for her and I think I’ll have bad blood for the rest of her (hopefully short-lived) career. I need to see her get pin-pricked all over her body then dumped in a vat of lemon juice, only then will I be satisfied. 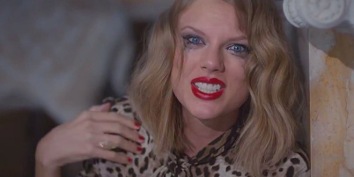