U2 Joshua Tree Tour 2017 Adventures: Of Shuttles and Ubers

I naively thought that stadiums in the US are like the ones here in the Philippines: located in the middle of a commercial center, surrounded by malls, shops and restaurants. In other words, easily accessible with no shortage of places to hang out in. Was I ever wrong!

The concert in the Bay Area was at the Levi’s Stadium in Santa Clara. I swear U2.com put the initial location as San Francisco before changing it to Santa Clara. Luckily for me, my cousins in the Bay Area knew about the place and knew that it is most decidedly not accessible, so they advised me to book a shuttle service for concert day to avoid all the hassle.

It should have been so easy. The ticket clearly stated our pickup time was 5 pm for the 6:30 pm opening act (which was another shocker – in the Philippines, no opening act would ever go on earlier than 8 pm!), and that we’d all meet up again after the show for our trip back. I also thought that it would be fun to be in a bus full of U2 fans. But by 5:20, there was no sign of a shuttle, so one of the take-charge ladies in our group decided to call the shuttle people. We were told that the driver was still stuck in a different city, caught in traffic because of the Giants game!

It was a lie! They did not get us to the event!

All around me, people were making plans to go to the stadium on their own. By this point I was almost crying because I felt so sorry for myself – imagine flying to the US and missing the show I came to see! But I was incredibly blessed – twice blessed, in fact! First, my cousins waited with me, and they were almost ready to drive me to the show, traffic be damned. Secondly, I happened to be standing near this friendly couple, Michelle and Jon. We got to talking, and Michelle asked me where I was from. When I said “Philippines” with tears welling up in my eyes, she immediately replied, “Oh no! We have to get you to the show!” And she and her husband very graciously let me ride with them in their Uber.

There was a hitch there too because the first driver had to cancel. But finally, finally, we found a driver who could not have been nicer. We were so relieved to finally get in a car and we told him our woes. He was sympathetic and then he told us, “Okay, don’t worry now, I’ll get you there.” And then he played U2 songs all the way to the stadium so that we could get ready! How cool was that?

My Uber friends Jon and Michelle in the back seat, and our cool driver Raul!

I was still crazy stressed when we got to the stadium because apparently you just line up anywhere and I wasn’t sure if I was in the right place. (The stadium also had a strict bag policy, and basically all you can carry is an index card-sized purse. Even my phone is bigger than that!) 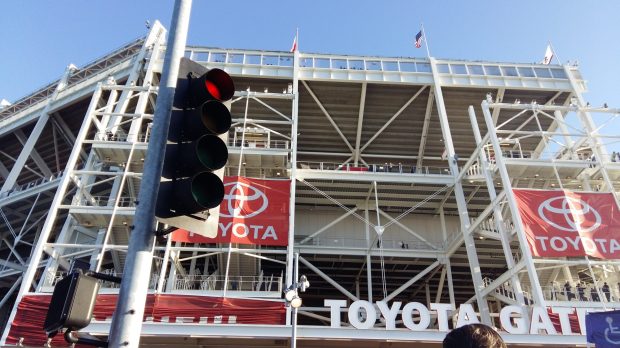 But I had a plan: buy my merch, go to the bathroom, buy my food, and then find my seat. I fulfilled that plan to the letter and when I finally got to my seat, I finally breathed a sigh of relief. And cried a little bit. I think that’s why my seatmate started talking to me. He probably thought he was seated next to a crazy lady. It turned out that he and his family were lovely people too! So I chatted with David, his wife Jaden, and their daughter Ana, who was at her very first concert. I congratulated them on their parenting skills, naturally.

I recovered in time to take some pre-show snaps of my pocket Bono!

You’d think that would be the end of the adventures. Nope. There was still the trip home from the concert to think about. So I said goodbye to my stadium friends and proceeded to worry about getting home. Because we didn’t ride the shuttle to the stadium, we did not know where the drop-off/pickup point was. Thank God I got Michelle and Jon’s number because I bombarded them with calls after the show. Running through the parking lot looking for the shuttle, that was the moment it dawned on me how crazy I was for going to another country alone to watch a show. I did not realize all the things that could go wrong, which they did on this night! But again, my guardian angel must have been looking out for me because I finally met up again with Michelle and Jon, and even though we had to walk 20 minutes to find our missing bus, I was okay because I was with people I knew. It was a real trek over roads and under bridges but we finally found our bus about 4 blocks from the stadium.

Everything that could go wrong, did. But on the other hand, as I told my cousins (who waited at the bus station until 1 am, and lent me their phone so I can contact my Uber friends – such heroes), everything also went right and my faith in humanity was restored. I was so lucky to have met these wonderful people who took care of me. Michelle even told my cousins when we finally got to the station, “We brought her back!” Isn’t that the sweetest?

All in all, even with all the snafus, it was still a great experience. The show was AMAZING. I was not counting on hearing “Bad”, which is probably my favorite song of all time and is so rarely played live that it’s an event when the band does it. And they did it! Fourth song in, and I was gone. Everything was right in the world. It was a truly Beautiful Day! 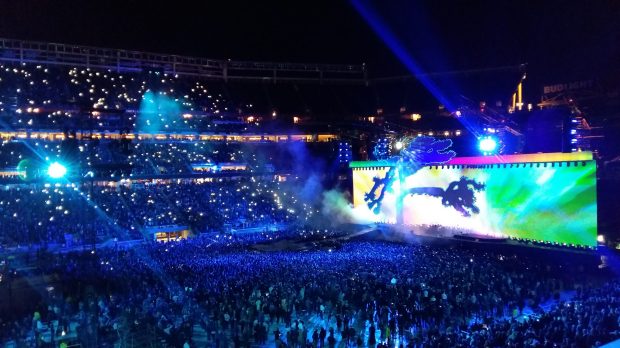 P.S. I got a refund from the shuttle service! I didn’t even bother to contact them, so I count that as another stroke of good luck!

Next up, how I survived my first GA experience!

2 thoughts on “U2 Joshua Tree Tour 2017 Adventures: Of Shuttles and Ubers”