Passionate music fans love to say they liked an artist before anyone else. “Oh I was listening to him before he became mainstream,” or, “My new favorite singer is someone you’ve never heard of.” Well, this story is only 5% that, and 95% “I was so wrong and what the hell was I thinking and what took me so long?!?”

Let’s back it up. I discovered James Bay’s music through that font of serendipitous music discoveries, Spotify. It was just one song, really – “Let It Go”. It was love at first listen, and I just had to write about it. That was October 2014. I was profoundly moved by that song so I did my research and found two of his EPs. But somehow, his other songs didn’t quite click with me. I thought it was mostly sensitive singer-songwriter type songs – not that there’s anything wrong with that, but I can only take so much wallowing at a time. I left the songs on my iPod, but they weren’t exactly overplayed.

Then after some months my niece told me about In The Mix, a music festival where her favorite band (Panic! at the Disco) would be performing with some other acts like Third Eye Blind and James Bay. I wanted to hear Third Eye Blind live, because their music was a huge part of my growing up. The 90s is my jam! Then the thought of hearing “Let It Go” live got me. Even though I barely knew two songs of his, James Bay made the decision for me. We were going to In The Mix!

This post isn’t about Third Eye Blind, so suffice it to say that their set was great and it was amazing hearing “Semi-Charmed Life”. They were the reason I bought my ticket. But James Bay was the reason it was more than worth it.

First of all, he came out in a Philippine track jacket. Which, I don’t care who you are, but if you wear my country’s colors, I like you immediately. Then he started with the powerful guitar-driven “Collide”, and all my pathetically mistaken notions of “just the sensitive singer-songwriter type” were blown to hell. What even was I thinking? Sadly, I judged the book by its cover, or in this case, the musician by his hat. Song after song, I was blown away. James Bay is a guitar god! Who knew? Well, everyone else did. “Craving”, “When We Were on Fire”, “If You Ever Want to Be In Love”, and “Need The Sun to Break” live are otherwordly. And the extended heavy intro he did for “Let It Go” made the payoff for those yearning first notes that much more spectacular.

It was a steady buildup, and by the time he got to “Best Fake Smile”, I turned to my niece and blurted out, “I think I love him now.” She was there for Panic! and to take photos and videos of James Bay for me, and she didn’t even know a single song of his, but to my surprise, she replied, “Me. Too.” After “Proud Mary” – a funky, bluesy rendition – I knew I loved him. Because come on! A young musician who chooses to cover a Motown classic for an audience of millennials? It was a done deal. I was completely, irrevocably, officially won over. That was it. I was a fan.

We were in the cheap seats of the ginormous MOA Arena, so high up that you only have to reach out and you’d be touching God. But Bay transformed the 16,000-seat arena into an intimate club, and we never once felt out of it. That takes major skills, and made me appreciate him even more. 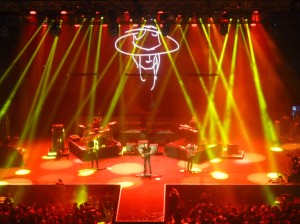 The exact moment I felt the arena transform into an intimate club.

I think I also have to mention that I have a home on the shallow end, and because I like pretty things, the more I looked at the big screen the more I noticed his cheekbones (which are unreal). Hey, I’m not ashamed to admit that.

I only go to concerts where I know the artist’s discography back to front, because I want to hear their songs and feel every moment. My friend and I have a list of what we call “concert-worthy” musicians who we’d buy tickets for, the moment their tickets go on sale, no questions asked. This was the first time I went to a show barely knowing the artist’s work. I guess the festival set-up was also a first, and festivals by definition are more open-ended and loose because everyone is there for different reasons. And now I’m wallowing in regret and what-ifs because I got stuck with my hugely mistaken impressions of Bay’s EP.  I didn’t get into Chaos and the Calm early enough. On the one hand, I am thankful that I went to the festival and got schooled on how awesome he is. On the other hand, I wish I had gone there already in love with the full-length album and that I had maxed out the experience. But on the other, other hand, if I had already loved the album then, would I have been satisfied with only a 10-song set? Probably not, right? I mean, I can’t remember if an act has come here for a show on the strength of just one album. So I guess it’s Me: 1 and Regret: 0?

And can we talk about that debut album for a minute? There really is a difference between an album and an EP. Suddenly earlier songs like “Move Together”, “Need the Sun to Break”, and “When We Were on Fire” are slick and polished as part of the album. They’re not overly produced either, which normally makes songs sound cold and lifeless. Instead, they have a richer, warmer, fuller sound, with the mad guitars and bass grabbing your attention. The album has equal parts poignancy for when you want to curl up in a ball and die, soulful blues for when you want to groove a bit, and plain rock for when you want to let your hair down and just dance. There is also a subtle fade-out between songs, which makes me feel like Bay and his producers really put some thought into making a coherent album and not just a collection of radio singles.

My Spotify playlists tell the story of this slow journey to loving Bay.  Chaos and the Calm came out in March 2015, but I only took note of the majestic and fantastic “Hold Back The River” in February this year. Now the album is on repeat the whole day. The point is, discovering an artist whose music you can really get into is a big deal. If you love music and are always looking for new songs to love, today’s pop scene is horribly depressing and can make you feel like you can only hold on to your classic rock if you want good music. But then someone like James Bay comes along, an actual, legitimate musician, an amazing guitar player who writes stunning lyrics – and you feel that everything is all right again. I’m already planning what to wear to his solo concert when he comes back. Because if you name it, it will come true, right?

Don’t be like me. Bask in the awesomeness of Chaos and the Calm here: