Happy Monday! After my TCM marathon last week I decided to do a regular feature on classic movies. And what better choice for my first movie than Bathing Beauty?

This is the first classic Hollywood movie I ever watched.  My uncle brought us some videos when he visited from the States and Bathing Beauty was one of them.  My mom encouraged us to try it because it was one of her favorites. In fact, her influence is a big part of why I got into classic movies in the first place.

Bathing Beauty stars Red Skelton as a songwriter and Esther Williams as a swimming teacher at an all-girls college. They’re about to get married so Williams plans to quit her post, and Skelton is about to drop his jukebox compositions for more high brow work. But his associate Basil Rathbone needs one more symphony from him so he (Rathbone) sabotages the wedding. Skelton then needs to win back Williams, so he enrols in the college. Hijinks ensue. 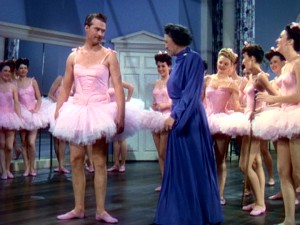 I think this is the perfect movie to introduce someone to the old Hollywood musical. It’s just light enough that you won’t get bored, and the musical numbers are very entertaining. My favorite is the scene in the school where Skelton’s character reworks the traditional Loch Lomond ballad into “I’ll Take the High Note”.  Red Skelton is his usual funny self, and Basil Rathbone plays the perfect “nice villain” with his impeccable accent. There are also a couple of Xavier Cugat production numbers which are quite dazzling.

It was after this movie that I realized I can’t tell my friends about all my interests. Can you imagine being in grade school and liking Red Skelton, Esther Williams or Harry James (who I may have crushed on in this movie)? Nooo. They would’ve looked at me like I was weird or something. Which I probably was, because it’s not really common for a kid to like old movies. So I felt like I had a secret life at home whenever I’d watch these films.  You have to suspend disbelief quite a lot for these movies. For instance, were water ballets really common back in the day? But Esther Williams was so regal in her finale, and you can imagine the impression she made in her sparkly white swimsuit and flowing cape, coming up out of the pool with a big lotus in her hand. She was a water princess! I wanted so  much to be her that my bath times may or may not have involved wasting precious water and pretending I was in a water ballet myself. Just don’t tell anyone, ok? See, now who can deny that old movies are good for kids? 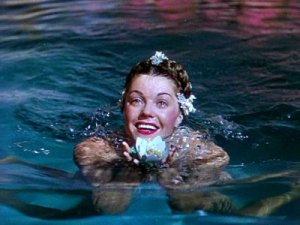 Oh look, I found this flower at the bottom of the pool NBD

Sparkly swimsuit, fire and water? What’s not to love?