Thoughts on the US Open

I was so looking forward to the US Open this year.  With Nadal’s early exit from Wimbledon, I wanted him to get right back in it and win the last major. Buuut, he got injured and withdrew from the tournament completely. Gah.

The US Open has always been my favorite Grand Slam tournament. Sure,  Wimbledon is classy and just reeks of tradition, but the US Open is just badass. There’s no other word for it. The crowds are so loud, music plays during changeovers, and there are night matches! Seriously, those lights are blinding.  The US Open is like the tennis equivalent of a  rock concert.

My best memories of the Open are all connected with Pete Sampras, my all-time favorite. I used to stay up until the wee hours of the morning just to watch his matches, never mind that I had school that day. He wasn’t as colorful as Agassi, but you could see that the New York crowd loved and respected him anyway. A Sampras-Agassi US Open match was the ultimate in tennis. The atmosphere and the stakes were just amplified. They even did a series of commercials for Nike where they played on the streets of New York. So awesome. 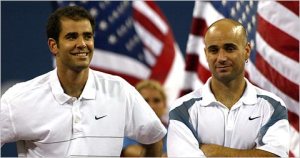 There was also one memorable night match between Sampras  and Alex Corretja. I think it was the 4th or 5th set and Sampras was really getting tired. Everyone was shocked at the possibility that he would lose. Then Sampras threw up on the sidelines! After which, he served an ace. He went on to win that match in 5 sets.  That was so classic and unbelievable and somehow, so US Open.

I haven’t been watching this year because with Nadal out, I’m not really interested in the tournament. Djokovic is pretty ok and I hope he at least makes it to the final to make it tolerable. But I’m pretty sure I’ll be watching that anyway because the US Open is just too cool to miss completely.