Now that that’s out of the way, I love love loved the season opener. Though I am still crying over Matt Smith (and probably will be for months to come), I was also excited to see Capaldi’s Doctor. Because I loved Eleven so much, I was so ready and open to love Twelve, because that’s who Eleven regenerated into. If that makes sense.

So many things to get into, but first, the opening credits. Loved it! The swirly whirly timey wimey clock thing was great, especially with there being a Twelfth Doctor now. I thought the revamped theme song was cool. To think that when they started changing it up from Ten to Eleven we kept complaining about how we missed the old one. Now it’s all cool. My niece says the new opening was fan-suggested, but I have yet to do research on that because I was diligent about remaining spoiler-free.

Seeing the Paternoster Gang again brought a smile to my face. I don’t know when it started, but I really love those three. Strax will always be my favorite homicidal potato, and he was exceptionally funny this episode. And damn, Madame Vastra was really spouting some deep shiz! Her conversation with Clara about the Doctor’s regeneration was thought-provoking.

Which brings me to my first favorite part of the episode – the way they really went into the regeneration and how that affects the companion. They didn’t go into it much with Ten, and of course there was no way to do that with Eleven. But the way they tackled it with emotion and depth got me. I loved that Clara had a chance to shine. I never liked her as a companion before because I never felt any chemistry between her and Eleven. Too much flirting on her part and not much to her character except being the Impossible Girl. I know there are so many Whouffle shippers out there, but I never really got that. It just always felt that to the Doctor she was not Amy, so sucks for her. But this time we finally got to know more about her.

And speaking of chemistry, was it just overflowing between her and Capaldi, or what? And not in a romantic, flirty way either (thank God). Just two people being friends. That scene in the restaurant was gold. Capaldi was deadpan, grouchy and just brilliantly funny. And I don’t know if this is even a thing, but I could still see a lot of Matt Smith in his reboot phase – the way Capaldi was just being a bitch to Clara, the way friends are with each other. Which could actually mean that Capaldi is that good – he makes the regen and reboot from Eleven totally believable! I have no reservations about Twelve and I do believe I’m going to love him completely (but just so we’re clear, Eleven is and always will be my Doctor). Sidebar though – I still don’t know how I feel about the shoutout to Amy – I mean c’mon, Clara’s always being relegated to Not-Amy status here! Can you believe my turnaround from hating her in Season 7 to actually defending her now?

This leads us now to the best part – that phone call. OH MY GOD that hit me right in the gut. The one teeny tiny thing I missed in The Time of the Doctor (though I thought it was still perfect!) was that Clara did not even get a goodbye. It was all Amy again. But that phone call more than made up for it! (I am tearing up again just typing this.) The moment Clara’s phone rang, I had a tiny flicker of hope – could it actually be? And it was! Matt Smith! (You and your surprise cameos! Also, I revel in my ability to remain totally unspoiled). At that point I just totally lost it. I never thought I would cry at a series opener. That’s reserved for regeneration episodes, right? (And Angels Take Manhattan. Hmph.) It was just absolutely perfect, the closure we all needed, the final, official handover. I read somewhere that some people thought it undermined Capaldi, to which I say, absolutely not! He’s the Doctor! Nothing can undermine him! Did Tennant’s appearance in The Day of the Doctor undermine Smith? Nope. So this phone call was just inspired. In fact, Capaldi’s lines in those last scenes, from saying to Clara “I’m not your boyfriend”, to his imploring her to see the real him, was just all kinds of awesome. Sidebar again – that “I’m not your boyfriend” line just sent my brain into analysis overdrive. I mean, we’re on board with this new non-flirty, older Doctor now. Why’d they have to go and dig up something that I didn’t even think was a thing? Another issue I’m still not sure how to feel about – I’ll have to rewatch Clara’s episodes to see if that will add any context.

Overall, this was an amazing episode. I think there was a dinosaur and a Half Man in there somewhere too. 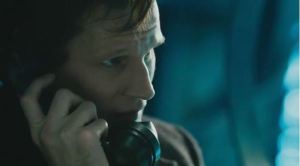