Based on a totally unscientific, non-music-theory-based analysis. Which means I just really like them.

My favorite lyric ever. So much so that I had it permanently etched on to my skin. It basically encapsulates the Golden Rule and all religious philosophies in two lines. Paul McCartney is a genius. 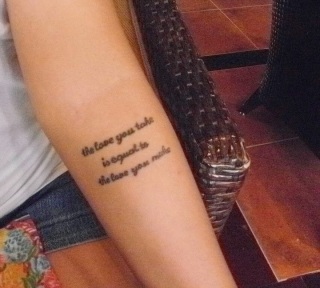 This is the coda to With Or Without You that Bono only ever sings live. This was never recorded and it’s a treat for fans if he decides to sing it at concerts. Knowing it’s not on any album makes the existence of the words even more special.

3. “Well, I’m standing on a corner in Winslow, Arizona and such a fine sight to see.  It’s a girl, my Lord, in a flatbed Ford slowin’ down to take a look at me.” – Take It Easy, Eagles

Try singing it – so many words but everything flows together so smoothly. And try singing it without cracking a smile – it’s impossible!

4. “You got that hair slicked back and those Wayfarers on, baby.” – Boys of Summer, Don Henley

Is there any other song that evokes the mood of summer better than this one? And this line made me determined to buy Wayfarers. 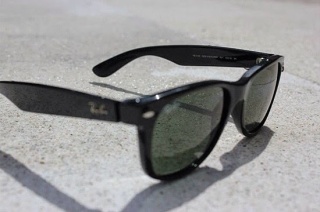 5. “I’ve looked at life from both sides now, from win and lose and still somehow, it’s life’s illusions I recall, I really don’t know life at all.” – Both Sides Now, Joni Mitchell

Because really, we don’t know shit.

The song that saved U2. And the line that proves that Bono is God…-like.

7. “Going back to the corner where I first saw you, gonna camp in my sleeping bag I’m not gonna move.” – The Man Who Can’t Be Moved, The Script

You can almost feel Danny O’Donoghue’s heart being ripped out. Also another wordy lyric that is just perfect when sung out loud.

8. “You and I have memories longer than the road that stretches out ahead.” – Two Of Us, The Beatles

9. “I’ve been tryin’ to get down to the heart of the matter but everything changes and my friends seem to scatter, but I think it’s about forgiveness.” – The Heart of the Matter, Don Henley

Don Henley is the master of the powerful realization.

10. “I may not always love you but long as there are stars above you, you never need to doubt it, I’ll make you so sure about it, God only knows what I’d be without you.” – God Only Knows, The Beach Boys

People never seem to get that this is a love song. You have to get past the first line! That’s the twist to it all. I think it’s called irony. I also think it’s one of the best songs ever.

← 10 Reasons To Love Wimbledon
Why You Gotta Be So Ruuude? →