The new Dr. Who is set to premiere in August, and I can tell you, I am seriously in need of a Doctor fix.

I watched all 7 series from 2005 in the space of a couple of months last year with my sister and niece. So you can imagine how the last few months without new episodes have been.  The best thing about getting into a show pretty late is the catch-up marathons.  When we started our marathon, we had this smug feeling that we had a practically never-ending supply of shows, so we would never have to wait a week for the next episode. But when we got to the last few shows, we suddenly realized that we would be just like everyone else who now had to wait for the next installment. What about the cliffhangers?!?

My love for Dr. Who started gradually, then blew up overnight.  I had been reading all sorts of references to the show and insider jokes throughout the internet. Finally, my curiosity got the better of me, and since I was also looking for a new show to watch, I got hold of the 2005 series. One episode in, Eccleston had me.

How many shows do you know have been around for 50 years? There was a brief hiatus in the 90s until it was revived in 2005. The show has been going on for so long, that you actually have to classify the original episodes as Classic Who. And because The Doctor regenerates every few years, different actors get to play the role and bring their own stamp to it.  So it has its sub-eras just like geologic periods – the Eccleston era, Tennant era, Smith era.

And talking about the different Doctors (one of the first things you learn – the main guy’s name is not Doctor Who, he is simply “The Doctor.” “Doctor Who” is a question) is like those lessons you had in Social Studies, where you talk about Presidents and their achievements. Christopher Eccleston is credited for bringing the Doctor back to life. His Ninth Doctor was a bit cocky and sassy, with a wry sense of humor. David Tennant, the Tenth Doctor, played him a bit more intensely and dramatically (there were a lot more screamy scenes with Tennant), though the sense of humor was not lost. And Matt Smith, number Eleven, played him like a crazy and lovable overgrown child. He’s my favorite, by the way.

When it’s time for The Doctor to regenerate, you have to mentally and emotionally prepare yourself for the heart-wrenching departure. There is much attention paid to The Doctor’s last words (as much as his first words after regeneration). And even after all that preparation, the tears will always flow. And I’m talking about bawling here, the kind that actually leaves your eyes and nose swollen and red, the kind that you carry with you to work even after a few days. I can’t remember any TV show that has made me cry this much since, ever.  And then there are those episodes that catch you off-guard, that start out all light and funny until they hit you right in the gut and you bawl all over again (I’m looking at you, Angels Take Manhattan!).

You always start out hating the new Doctor. When Tennant first came in, I kept saying I would never like him – he’s just Barty Crouch Jr! Fast forward to his last episode, and I was crying my eyes out. His departure was actually stretched out over a couple of episodes, which meant the tears went on and on and on. Damn you, Russell T. Davies!

We’ve learned our lesson now. Since we’re waiting for the new season series, my niece’s solution for this insane irrational emotional investment is for us not to watch Matt Smith’s last episode, until the first episode for Peter Capaldi’s Twelfth Doctor becomes available. That way, we won’t be so devastated because we’ll eliminate the moping period. Quite ingenious, yes?

In the meantime, we will just wallow in our fangirling for now.

My phone/iPod Case – It’s bigger on the inside (heh.) Shameless plug: Handcrafted by heartfelt_ph, go follow them on instagram (@heartfelt_ph) for more cute designs. 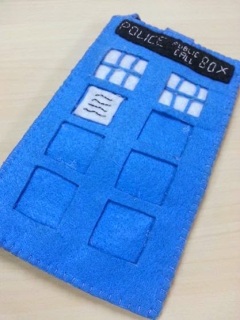 50th Anniversary commemorative books – there are supposed to be 5 more to complete the set, but these were the only ones available at Fully Booked (Eastwood Mall) at the time. 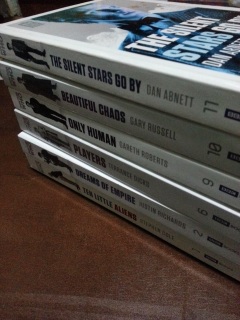 One thought on “Whovian and Proud!”